By Kevin R. D. Shepherd 3rd October 2013 December 26th, 2019 Basava Premanand, Gerald Joe Moreno, Sathya Sai Baba
No Comments
In his attack on Professor Tulasi Srinivas  (entry no. 2 on this blog), Gerald Joe Moreno correctly observed that the anthropologist cited the present writer as a “biographer of Shirdi Sai Baba” (Srinivas, Winged Faith, p. 354 note 24). Moreno was decidedly averse to this favourable reference; he insisted upon describing me as “a vanity self-publisher who admitted he is not an academic.”
An academic status is not necessary for a biographer, and the Moreno version of publishing is very much in question. Moreno himself was not an academic, and had no books to his credit. His phraseology is deceptive. I did not need to make any admission, never having posed as an academic. 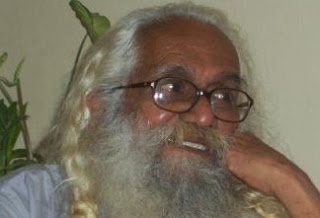 In the same attack feature, Moreno identified me as “a malicious critic of Sathya Sai Baba who has ridiculously accused the Guru [capital G] of being ‘closely allied with terrorists’ and who fanatically accused Moreno [third person] of being an ‘internet hit man’ and an ‘internet terrorist’.”

These remarks typically lacked context. Moreno had often been accused of fanaticism by victims. My reference to guru-related terrorism followed the reporting of Basava Premanand (1930-2009), the Indian rationalist and major critic of Sathya Sai Baba. Premanand opposed Sathya Sai for many years, contesting the supposedly miraculous feats of that famous guru. Premanand also referred to numerous murders and other problems which he associated closely with Sathya Sai. Many of the details here are unconfirmed, but it is legitimate (and even obligatory) to cite the output of the major Indian critic,  One is not necessarily being at all malicious in so doing. Amongst other matters, Premanand informed the BBC (quite credibly) that he had been attacked by violent pro-guru extremists.
I did indeed accuse Gerald Joe Moreno (alias Equalizer, SSS108) of being an internet terrorist, a phrase which appeared in the title of a web article composed in 2009. That description arose because of his continued hostility, despite my complaints commencing in 2007, complaints which had appeared on two websites of mine. One of those complaints related to the fact that Moreno had duplicated hostile and misleading accounts of myself (found on his website saisathyasai) on a blogspot cycle featuring the pseudonym of Equalizer (i.e., Moreno).
This belligerent excess in my direction was matched by similar gestures against ex-devotees. Many observers were prepared to credit my description of “internet terrorist.” Moreno had gained the reputation of a cyberstalker.
The Moreno output is classifiable in the basic sense implied by the phrase “hate campaign,” meaning attack blogs which exhibit vehement and distorted arguments frequently tending to libel. See Hate Campaign Blogs. Obsessive multi-entry blogs targeting  the same victim are an indication of strong antipathy. Gerald Joe Moreno (Equalizer) achieved nine of these inquisitions at blogspot, in addition to his deadly website saisathyasai.com, described by some victims as the portal to hell. Such treatment can easily arouse retaliation, which may be necessary for self-defence.
Equalizer (Moreno) resorted to an animation device on his blogspot attacks. This device declared a “Campaign to stop Anti-Sai Activist’s Abuse.” The word Abuse here alternated with Defamation, Libels, and Dishonesty. This verbalism reflected the attitude of Moreno that all allegations of abuse made against Sathya Sai Baba were hopelessly wrong, and therefore all condoning reference to those allegations was a crime. In Moreno language, any emphasis on allegations meant Dishonesty and Abuse.
In this perspective, the informants about abuse, including the ex-devotee victims of abuse, were despicable Anti-Sai Abusers. That was the basic gist of Moreno’s aggressive argument about the “Anti-Sai” contingent. This conceptual scheme was viewed by Moreno (Equalizer) as granting him the right to denigrate all critics, who were treated to vehemently contemptuous dismissals.
From 2004, Moreno became the major (though unofficial) web apologist for the Sathya Sai Organisation. His attack site demonstrated fervent “Pro-Sai” enthusiasm, and denounced critics of Sathya Sai Baba. Gerald Joe Moreno also maintained an extensive blog at sathyasaibaba.wordpress, which again exhibited the pseudonym of Equalizer, and rather deceptively claimed to mediate “love and spirituality.”
Critics objected that the “love and spirituality” decodes to an intensive mode of hate campaign discernible across the spectrum of Moreno web activity. At blogspot.com, Moreno (Equalizer) specifically described his presentation in terms of a campaign against critics of Sathya Sai Baba.
His strategy on Google Search aroused increasing resistance. Moreno continually accused his critics of “deception.” His entries on Google Search name listings (of his victims) became notorious for disparaging statements and aspersions which showed on those listings. See further Moreno and Ex-Devotees and Pro-Sai Detractors.