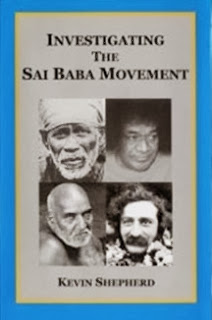 In 2007, I countered the SSS108 (Gerald Joe Moreno) User page on Wikipedia, which dismissed my book Investigating the Sai Baba Movement (2005). The annotated contents of that book were not described by Moreno. The book was referenced in relation to a very brief Wikipedia editorial quote, which Moreno disliked because of explicit associations with his ex-devotee opponent Robert Priddy. The 1993 “bedroom murders” at the Puttaparthi ashram of Sathya Sai were too controversial to be mentioned on Wikipedia, according to the apologist tactic.

The stigmatising User page had been assisted by Jossi Fresco, a figurehead for the promotion of religious sects and “cults.” Fresco was influential on Wikipedia as a supporter of the guru Prem Rawat. He eventually became the subject of much criticism, and “retired” at the end of  2008.

The offensive User page was quite specific about the subject of censorship, being entitled User:SSS108/Kevin Shepherd. On my first website (2007), I protested at the cordoning gesture, and the evident sectarian complexion of the hostile tactic (this protest, in amplified format, is now Wikipedia Issues). Moreno quickly retaliated from his website saisathyasai.com. He attempted a complete justification of his policy, presenting me as the erring party. His counter included expressions deemed vitriolic and libellous by some readers. A strong underlying theme was that any criticism of Sathya Sai Baba amounted to the critic being wrong and deserving censure.
The guru defender here argued that none of the allegations against Sathya Sai had been proved in a court of law, as though this factor negated all criticism. The allegations (actually strong testimonies) were described in terms of “frenzied Anti-Sai speculations.” My protest was dismissed in terms of “just another foaming-at-the-mouth Anti-Sai ruffian (who come a dime a dozen in the Anti-Sai Movement).” I was not a member of any movement. I had written a book, with over 500 annotations, that was peremptorily dismissed on the basis of an appendice associated with the accuser’s major ex-devotee opponent. 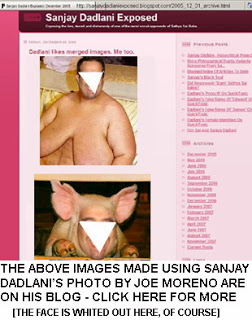 Extract from an ex-devotee site reproducing an Equalizer (Moreno) blog
Moreno contrived various arguments supposedly proving that I was wrong about all the subjects I had mentioned online in relation to Sathya Sai Baba. For instance, a critical article in The Guardian (2006) was overshadowed by a theme that Moreno’s opponent Sanjay Dadlani had known about that article in advance, and therefore the article was biased, being part of the Anti-Sai conspiracy. My subject was the journalist Paul Lewis, not the ex-devotee blogger Dadlani. The Lewis article was very relevant, while comprising only a fractional part of the critical information available on Sathya Sai Baba.

Avoiding the content of the Lewis article, Moreno preferred to dwell upon polemical references and pornographic associations of his erratic opponent Dadlani, while treating these as proof that criticism of Sathya Sai Baba is erroneous. This recourse answers to a form of diverting commentary and a simplistic pattern of apologist tactic. The acrimonious blog duel between Moreno and Dadlani (both young men), including many personal attacks, led absolutely nowhere.

Dadlani had composed a blog called Sai Baba Exposed. Moreno countered with Sanjay Dadlani Exposed. Dadlani also produced the blog Gerald ‘Joe’ Moreno Deception, including  an entry about The Guardian issue. This was entitled Moreno’s Guardian Lies and Speculations, and dated November 2006. Dadlani denied a close collaboration with Paul Lewis, emphasising that Moreno had misconceived this matter. The Moreno theme of “exposure” was evidently in retaliation for the proclaimed exposure of the guru by ex-devotees. I belonged to neither of these contending camps, but was regarded by Moreno as a member of the opposition.

I was now stigmatised by Moreno as a “vanity publisher,” an accusation he had also levelled at a prominent ex-devotee (namely Robert Priddy, a retired academic and webmaster). This meant that my eleven books could be treated with contempt and totally ignored. Moreno attacks were the sole gauge for assessment; an insidious implication was that Moreno could not be wrong because he represented the lofty cause of the guru.

Not only did he caricature my career as a writer and publisher. Moreno also made pronounced errors. He even attributed to me two publishing logos that were not my own. He also misleadingly stated that the publisher Routledge “turned away Shepherd’s manuscript.” Routledge never saw that manuscript, merely being told about it, the length being a deterrent to their schedule at the time. The manuscript was Minds and Sociocultures: Zoroastrianism and the Indian Religions. This was eventually published with an extent of a thousand pages (Versus Sectarian Polemic).

In the cult world, unread books can be categorically dismissed. Thousands of annotations do not count against libellous attacks emanating from the troll sphere. Wikipedia activist editing was here revealed in full profile. This is where Jossi Fresco emphases lead: to arrogant misrepresentation and vindictive dismissal.

No complaint was legitimate against the elevated spiritual plane of saisathyasai, the Moreno site. Here the unassailable and ubiquitous mandate was: “Exposing Critic’s Smear Campaigns Against Bhagavan Sri Sathya Sai Baba.”

My crime had been to insert three short appendices in a lengthy annotated book, appendices that gave space to ex-devotee reports (more especially those of Robert Priddy). This meant that all eleven annotated books must be stigmatised and my role misrepresented as that of a vanity publisher. Daring to counter Moreno (Equalizer) himself, the proclaimed Exposer, was a further crime. In the cult world, criticism is not tolerated; instead, critics are made the target of sectarian vitriol.