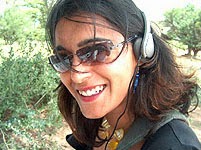 BBC reporter Tanya Datta
In his attack on myself at saisathyasai.com in 2007, Gerald Joe Moreno blacklisted the BBC Secret Swami documentary of 2004. The title of the G. J. Moreno blog proclaimed accusingly: “Kevin (R. D.) Shepherd referenced the BBC Secret Swami Documentary.” This BBC programme had become so well known and applauded that his reservation may be considered an apologist feat.
When the BBC investigated Sathya Sai Baba, they contributed some provocative insights, detailing both sides of the controversy about that guru. Yet Moreno (Equalizer) presented me as being in error for referring with approval to this documentary. He also misrepresented a court case occurring in California, which he associated with the BBC programme via the American ex-devotee Alaya Rahm, who testified to sexual abuse. According to Moreno, Alaya Rahm resorted to street drugs and alcohol, therefore his testimony was invalid.
The one hour documentary featured the BBC reporter Tanya Datta, who conducted varied interviews. The schedule covered basic components of the charges made against Sathya Sai Baba, i.e., fake miracles, sexual abuse, and the bedroom murders (see Anomalies and Testimonies).
An interview with the Rahm family (Alaya Rahm and his parents) was accompanied by clips of the guru at the 2004 Shiva-ratri festival,  performing a supposed miracle. The major Indian critic Basava Premanand was interviewed, describing how he had been investigating the guru since 1968. He and his colleagues were shown explaining how “miracles” could easily be performed in a deceptive manner, e.g., the materialisation of ash (vibhuti) and the ejection of a lingam (sacred object) from the guru’s mouth. The lingam could easily be concealed in a towel. The ash (and cheap jewellery) appeared via sleight of hand.
A contrasting interview with the wealthy American devotee Isaac Tigrett disclosed his belief that the “allegations” (actually solid testimonies)  of sexual abuse were probably true. “I believe there is truth to the rumours.” Tigrett also said condoningly: “He [Sathya Sai Baba] could go out out and murder someone tomorrow, as I said, it’s not going to change my evolution.”
An American ex-devotee named Mark Roche was also filmed. He relayed the attempt of Sathya Sai to engage him in oral sex during the year 1976. The Rahm family (in America) referred to similar experiences (see exbaba.com, Witnesses tab).
In relation to the notorious murders of June 1993, occurring at Puttaparthi ashram, the BBC interviewed the ex-Home Secretary for Andhra Pradesh, Veluyudhan P. B. Nair, who was in charge of the state police. He early discovered that the official police report of the controversial event was “riddled with lies and inconsistencies.” This commentator disputed the official version that police officers shot the four intruders in self-defence, instead urging a verdict of “cold-blooded murder.” A cover-up is strongly implied.

According to Nair, “the killing of the boys was only to buy silence.” Basava Premanand insisted that the central government stopped an investigation of the murders to prevent “economic offences, sex offences” emerging into the light of day.

Such factors were not welcome to the polemical campaign of Gerald Joe Moreno (Equalizer), who strenuously denied all the negative reports as being an error of the “Anti-Sai” contingent.

See further the BBC Transcript. See also BBC Documentary and A Reflection. Another documentary also assisted to support criticism of the Puttaparthi guru.  In 2002, the national television and radio broadcaster (DR, or Denmark Radio) of Denmark transmitted the evocative feature entitled Seduced by Sai Baba. This programme was viewed by millions in Denmark and Norway, afterwards being shown in Australia during 2004. The 54 minute Danish documentary investigated the sexual abuse of minors, and also revealed Sathya Sai “miracles” as sleight of hand (a Danish conjuror knew what really occurred).

In Denmark, the Seduced documentary caused a public outcry, revoking the purchase by Sathya Sai devotees of Arresodal manor estate. The devotee plan was for a Sathya Sai College at this famous location. Elsewhere, such colleges were scenes of sexual abuse. In Denmark, devotees made threats and launched litigation cases, failing in their apologist tactic.

Testimonies to sexual abuse were strongly denied as “wild allegations” by Sathya Sai devotees. However, some partisans eventually portrayed the abuse as a form of “spiritual healing,” a contention appearing online in 2006, via an item by devotee Ram Das Awle. This writer claimed endorsement from Sathya Sai. The “sexual interventions” of the guru were here acknowledged as a fact. By now, there were so many reports of the guru’s sexual abuse appearing online that a more convergent strategy was evidently approved. Some devotees nevertheless continued to deny all the testimonies, confirming the widespread confusion. Critics described the new apologist strategy as a “sick rationalisation” of perverse habits.

Many converging testimonies and reports were the basis for critical assessment of Sathya Sai Baba as a homosexual and paedophile who liked to fondle males in the 6-24 age bracket. He never molested girls. He often favoured oral sex, which in his personal instance, he is reported to have described as union with God. He told his favourite boys that marriage was bad; a number of men around him were identified as homosexuals. The fate of Indian student victims at the Sai Colleges was particularly tragic, because their devotee parents were opposed to all realistic details, being indoctrinated by beliefs prevalent at Puttaparthi ashram.