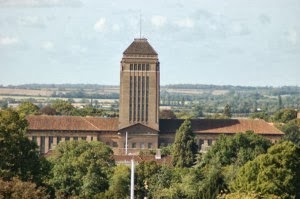 Cambridge University Library
In October 2008, Gerald Joe Moreno (alias Equalizer) duplicated his “vanity publisher” theme on a blogspot feature, under the heading of Introduction to Kevin RD Shepherd.  This was examined by my legal adviser, who expressed a negative verdict.

The troll blog stated that I am “a garrulous writer adept in writing loose, tabloid-like diatribes composed of rumour, hearsay and poorly researched claims.” More specifically, Equalizer asserted that his blog was “created to refute and respond to Kevin RD Shepherd’s articles against Joe Moreno.” Third person Moreno did not tell the reader that those three articles were written in protest at his stigma and libel.

The invective of Gerald Joe Moreno was expressed in the original 2007 sub-heading “Kevin Shepherd: The ‘serious amateur’ non-academic writer  who conducts seriously amateurish and biased research.” Moreno did not understand the academic tag of “serious amateur,” himself being a non-academic blogger who had not written any books. He was attempting to justify his cordoning tactic on Wikipedia, an episode which had preceded his indefinite ban.

Moreno expressed the erroneous verdict that the unofficial phrase “serious amateur” was used exclusively in relation to astronomy, photography, and botany. He derived this acute contraction from a very literal reading at the websites of Cambridge and Oxford universities. This tactic reveals the dependence of bloggers on web entries, as distinct from active participation in research activities.

On his Equalizer blog, third person Moreno repeated his error of misrepresenting me as having four publishing imprints instead of two. He blatantly  ignored my clearly expressed complaints on this score. He even reproduced his error of New Media Books Ltd, there being no publishing imprint with that name. In contrast, New Media Books did exist, the point being that I was not the publisher of the two books bearing this logo. The only two imprints that were my own were Citizen Initiative and the discontinued Anthropographia.
Moreno had become notorious for never altering his statements; no revision was applicable to him, who was always right. Complaints and protests could be totally ignored as trifling reflections of victims who had dared to counter Moreno, the blog campaigner in the cause of Sathya Sai Baba.
The accusation was made: “Kevin Shepherd has no claim to any sort of academic credentials.” This is not a crime, especially as third person Moreno had no such credentials, no history of library research, and no books to his credit. He contemptuously mentioned my “private research project” at Cambridge University Library (CUL). Equalizer was here anxious to reiterate that CUL was “not to be confused with Cambridge University itself.” This improvisation ignored the major participation of CUL in the life of Cambridge University.
Third person Moreno went on to accuse me of having boasted that I followed “academic rules in citing sources to a greater extent than many academic philosophers.” The context of this reference was lost upon the sectarian apologist. I had protested at the confusion in my Response to Moreno (2007). The objection was completely ignored by Moreno, whose reporting proved unreliable to an acute degree.
Very briefly, some academics had noticed my annotations in published books; they commented that these were more detailed and extensive than the notes found in many works by academic philosophers. The latter are rarely historians, and often employ conceptual sources only, drawn from philosophy. Whereas I did employ references to a variety of scholarly works, including journals and books applying to the history of science, the history of religion, and also social science. I do not claim any distinction in this respect; I have merely pointed out that the academic assessment did occur in relation to citizen books.
Because of the gross misinterpretation, I had removed the afflicted reference the previous year from my (first) website. Moreno failed to report this action. With typically misleading negligence, he instead gave the impression that the abused quote was ongoing at my site.
A curiosity in Equalizer blog labels was noticed. One of these read “Findhorn Foundation Radical.” This was an erroneous definition of myself. I have never been a member of the Findhorn Foundation. I am known as a critic of that organisation, and in a completely independent capacity.
Some blog readers received the impression that I was some sort of new age rebel from the Findhorn Foundation who had wandered into a scruffy minor library in Cambridge, there to boast about my achievements in citing sources, and ultimately to slur the angelic blog giant Joe Moreno with “tabloid-like diatribes.”
Beware of blog introductions, in case these are misleading.
Kevin R. D. Shepherd
ENTRY no. 6
Copyright © 2013 Kevin R. D. Shepherd. All Rights Reserved.