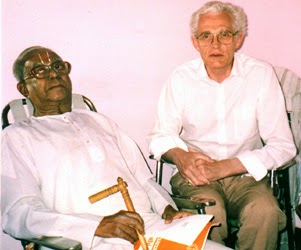 V.K. Narasimhan and Robert Priddy, 1994
Gerald Joe Moreno (Equalizer) was a militant supporter of Sathya Sai Baba (d.2011). He maintained extremist descriptions of ex-devotee Robert Priddy, a retired academic in Norway. Moreno wrongly presented  Priddy as an LSD advocate. Priddy had taken LSD long before in the 1960s; his own report invalidates the accusation. “My involvement with LSD ended many decades ago.” The LSD defamation was spread extensively on the web by the cyberstalker tactics of Moreno, who was confronted for his infringement of copyright.
Moreno bracketed me with Priddy, to the extent of creating a blog feature entitled “Kevin Shepherd and Robert Priddy.” I was presented as a virtual accomplice in Anti-Sai crime with the leading Western critic of Sathya Sai Baba. In actual fact, I had never met Priddy. I was not an ex-devotee (or devotee), but an independent critic. I merely corresponded with Priddy during the period of Moreno web aggression (2006-2010). I was sympathetic to his substantial dissident data; Priddy was informative to a surprising degree. However,  I did not share his outlook as a whole, which tended to be sceptical in the materialist sense (there is abundant latitude for scepticism, but this does not have to be “materialist” to possess validity).
In 2006, a Wikipedia article on Priddy cited my book Investigating the Sai Baba Movement (2005). This development prompted a censorious Moreno campaign in my direction, at first on a Wikipedia User page. When I objected to this treatment, Moreno (SSS108) targeted me at his notorious website. I was even depicted by Moreno as participating with Priddy in a “constant bashing of Sai Devotees as liars.” In reality, I protested against the aggression and manipulation of Moreno, which commenced against me on Wikipedia.
Moreno (Equalizer) made elaborate complaints that Priddy had made huge mistakes in his report of V. K. Narasimhan (d.2000), a devotee of Sathya Sai Baba who lived at the Puttaparthi ashram. The idiom was: “It is entirely possible that Robert Priddy fabricated or embellished information about V. K. Narasimhan to further his venomous campaigns against Sai Baba.” That was one of the more restrained Moreno assertions.
When inspecting the relevant materials, I found that Moreno was avoiding the crucial point. I expressed this disagreement on my first website, as a consequence being treated to a volley of attack strategy that quickly showed on my Google name listing. Moreno asserted that one of his webpages provided “concise and damning information about him [Priddy] that proves he is not credible.” The word proves was here rendered in bold print, part of the blog tactic designed to emphasise Moreno key words as being unassailable.
The attack was extended in such phrases as: “Robert Priddy’s attributions to V. K. Narasimhan are subjective and non-verifiable hearsay.” The word subjective was here emphasised. Nobody was supposed to argue with such finality of judgment; to do so was a crime of major proportions and an offence punishable by libellous blog campaign.
The Equalizer blog “Kevin Shepherd and V. K. Narasimhan” was typically tyrannical and condemnatory. For example, “Kevin Shepherd’s position about V. K. Narasimhan undermines his self-professed integrity and highlights his bias and unsupported viewpoints.” I had never made a case of professing integrity, instead objecting to the misrepresentation achieved by Gerald Joe Moreno.
Priddy published online his early diaries dating from the 1990s and earlier, when he was a devotee of Sathya Sai Baba and in personal contact with Narasimhan (the content formerly online at saibaba-x.org.uk/16/Priddy’s_Notes). These diaries furnish adequate proof of his contentions. Priddy himself was at first puzzled. “My very first discussion with Narasimhan… left me perplexed, because he openly ridiculed those who insisted that Sai Baba was omniscient and omnipotent.” Moreover, Narasimhan “always harboured doubts about Sathya Sai Baba’s extravagant assertions” (quotes from saibaba-x.org.uk/16/Narasimhan_RobertPriddy).
Narasimhan was an atypical devotee, formerly a journalist of repute; he is reported to have been deeply critical of varied events and policies relating to his guru Sathya Sai Baba. This instance serves to underline that prohibitive mandates about “what could not have happened” require due caution in the analysis of guru phenomena.
Narasimhan was blind in his right eye. Sathya Sai had advised him to have an eye operation, but Narasimhan  left the hospital before the doctors advised. His eye became swollen. The guru applied holy ash (vibhuti) in his accustomed manner. Instead of a miracle cure, the swelling increased, and the sufferer was soon blind in that eye. In many other instances, Sathya Sai tended to avoid medical treatment, as a consequence becoming notorious outside the ranks of devotees.
The critic Basava Premanand referred to cases of promised cures that never occurred. Because of Sathya Sai, patients frequently did not seek medical assistance. This guru affirmed that cancer could only be cured by the grace of God, a belief closely associated with his own proclaimed identity as an avatar (divine incarnation). The official journal of his movement, Sanathana Sarathi, declared that the best treatment for cancer was to abandon doctors in favour of the Puttaparthi guru. Critics concluded that Sathya Sai was ignorant of cancer; he gave “incomprehensible medical advice.” Ex-devotee Faye Bailey reported that his counsel “nearly caused permanent damage to her, before she at last resorted to Western medical treatment” (All Boys are Golden – The Untold Story, 2009, exbaba.com).
Kevin R. D. Shepherd
January 2014 (modified 2021)
ENTRY no. 17
Copyright © 2021 Kevin R. D. Shepherd. All Rights Reserved.