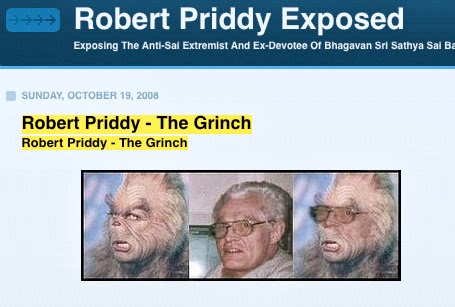 Moreno (Equalizer) blog depiction of Robert Priddy, 2008
Equalizer (Gerald Joe Moreno) furthered a web campaign of purported exposure. A number of his blogs bore the proclaimer of “Sai Critics Exposed.” The Sai reference denotes Sathya Sai Baba, not Shirdi Sai Baba (I had then written two books featuring favourable accounts of the Shirdi entity, but Moreno lore and libel completely ignored these).
The contested Equalizer blogs also bore an explicit campaigning motto, worded as: “Campaign to Stop Anti-Sai Activist’s Abuse.” This motto was deceptive. Anti-Sai was a favourite slogan of Moreno, who declared his own orientation in terms of Pro-Sai. The “abuse” here referred to testimonies of sexual abuse, plus other problems, in relation to Sathya Sai Baba (d.2011). Moreno did not recognise the validity of testimonies from ex-devotee victims.
There were nine Moreno blogspot features pillorying “Sai Critics.” Seven of these were ex-devotees, including retired academic Robert Priddy and Dr. Timothy Conway. Reinier van der Sandt (the Dutch musician) was not an ex-devotee; he was described to me as a webmaster of exbaba.com, a major website for critique of Sathya Sai Baba. I was the only non-activist represented. The attack and defamation was thus being extended into the public sector. I was not an ex-devotee, nor a web activist against the guru. However,  I was definitely an objector to Moreno tactics in my direction.
Three images of myself were used by Equalizer (Moreno) in a much duplicated composite. That triple image is symptomatic of cultist excess. Ex-devotee Robert Priddy received a despising pictorial representation as a primitive ape-like creature. Of course, nobody was supposed to show an image of Moreno, as he prohibited this practice, in relation to his sole known photograph.
Another ex-devotee on the hit list was Barry Pittard of Australia. He was treated to a very misleading “exposure” as a sexual aberrant. Moreno misrepresented data on a website to mean that Pittard was guilty of “paedophilia,” a verdict posted on yahoo.com. The rebuttal was so decisive that the accuser was obliged to retract his allegation, an action that “was most grudging and manipulative in its wording – a single line buried among a mass of self-justification.” Moreno continued to post his defamation on his website and also bulletin boards. See Defamation of Barry Pittard.
In 2008, I had cause to comment: “It is very obvious that Moreno’s belief in the priority of Sathya Sai Baba entails a categorical dismissal of any criticism as being a manifestation of perversity or conspiracy.”

The numerous testimonies of abuse have withstood denials, providing a realistic guide to events that cannot be dismissed because of devotee preferences to the contrary.
A well known testimony was made by Hans de Kraker. In the interview room at Puttaparthi, he found that Sathya Sai Baba promised to give him everything. This transpired to be a dubious honour. The ex-devotee related:

He [Sathya Sai] now takes my head, and pushes it quite firmly into his groin…. Now I am holding his buttocks and wonder what the hell my divine master is asking me to do! I let go my arms and now I am even more shell shocked… he pulls up his dress [robe], presents me his half-erect penis and invites me to take up my Good Luck Chance. “This is your Good Luck Chance.” I am now on my knees facing his erect penis, being asked to perform oral sex [the guru now insisted that the reluctant devotee take a “Second Good Luck Chance” in this sordid procedure]. I refuse and get up without saying anything. I am now angry, confused and dazed…. A very clever manipulator and professional deceiver had just trashed the fundamentals of the past eight years of my life. (Personal Experiences from Hans de Kraker, 2000, exbaba.com, Witnesses tab)