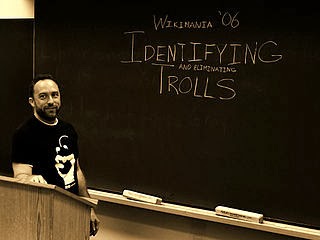 Wikipedia manager Jimmy Wales in 2006 at a Wikimania conference discussing the identification and elimination of trolls.
The activity of internet trolls has become a major issue, with new measures in process and in debate. A well known Wikipedia article refers to different applications of the term troll. Standard advice is to ignore rather than to engage with a troll. Wikipedia is strongly associated with trolling. Larry Sanger of Citizendium explicitly referred to trolls in his acute dissatisfaction with the “anyone can edit” policy on Wikipedia, granting a general license to the use of pseudonyms.
At large, the pseudonymous phenomenon of trolling varies from militant teenage aggression to more sustained and menacing attack by seasoned cyber agitators. Some critics say that all web users must be registered with their real name and image identity; moreover,  all websites in defiance of this precaution should be eliminated from the web. Until such a development  occurs, the internet is uncivilised.
Gerald Joe Moreno, alias Equalizer, was not a typical troll, being known by his real name at his website. However, many of his blogs exhibited a pseudonym. In this respect, he can certainly be considered a troll. Many readers of Equalizer blogs did not understand that Moreno was the author. An increasingly general public impression of the troll phenomenon (certainly in Britain) is that of a miscreant who attacks and slurs while concealing personal identity.

A basic problem, in the case of Moreno (Equalizer), is the aggressive and defamatory verbal style demonstrated by the role of “guru defender.” He was also accused by ex-devotees of being a cyberstalker, which is a very undesirable category.
Moreno (SSS108, Equalizer) assumed that he was victorious in his 2007 online repudiation of myself. Using the pseudonym of Joe108, he posted a brief item of five lines on digg.com, a popular American site. He asserted:

Attempting to portray himself as a serious researcher into the Sai Controversy, Kevin Shepherd wrote a rambling diatribe against Joe Moreno. Moreno responded to Shepherd and exposed him as a shabby and biased researcher.

Troll boasts are notorious for a deceptive sense of inflation. The so-called “diatribe” was my complaint arising from Moreno’s censorious Wikipedia User page (dated 2006) against my publishing venture. Some observers say that the complaint did not ramble, but made a strong point, which Moreno evasively resisted. I did not claim to be a researcher into the “Sai Controversy,” an apologist phrase, instead referring to some relevant data concerning my own case (the updated version is at Wikipedia Issues).
I responded to the overbearing gestures with a detailed refutation of the supposed victory. My lengthy Response to Moreno (2007) was conveniently ignored by the contested entity, in preference for the five line frivolity posted on digg.com.

Improvised triple image of Kevin R. D. Shepherd displayed on Equalizer blogs.
Another factor emerging was the aversion of Moreno to any presentation of his image. I had included his sole known image in my original article of protest. I was berated for this disclosure of his appearance, also threatened with legal consequences if I included his image in any book (which was not my intention). Moreno was so opposed to the employment of his image that eventually I deleted this from my sites in April 2010. He failed to respond in due measure, retaining all three of the images he displayed of myself so frequently and abusively (along with five of my mother).
The fact emerges that my image was reproduced over eighty times on the Equalizer blog cycle of 2008-9. Yet the image of Gerald Joe Moreno (Equalizer) was conveniently prohibited by the subject. The “guru defender” version of the lax troll code may be considered questionable.
Kevin R. D. Shepherd
ENTRY no. 10
Copyright © 2013 Kevin R. D. Shepherd. All Rights Reserved.