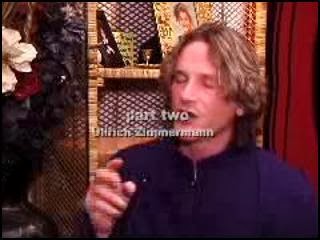 Ullrich  Zimmermann
In October 2008, the Equalizer (Moreno) blog Kevin Shepherd Exposed reproduced the gist of earlier Moreno assertions about Ullrich Zimmermann. This ex-devotee had provided three lengthy online video interviews describing his relationship with Sathya Sai Baba (d.2011).
Gerald Joe Moreno (Equalizer) opted to caricature my comment that Zimmermann had contributed “one of the most arresting testimonies of sexual abuse” in relation to Sathya Sai Baba. Critics say that Moreno was desperate to distract attention from the basic issue of abuse.
Zimmermann was confused on many points by his indoctrination at an early age; he was only fourteen years old when he first contacted Sathya Sai in the ashram at Puttaparthi. An activity of sexual abuse is discernible in his reminiscences of the guru, accompanied by exaggerated references reflecting some devotee beliefs. Clinically, this sort of material is very evocative, and deemed important by psychiatrists and other specialists.
The commentator Robert Priddy entitled his report Ex-Sai Devotee Speaks Out Convincingly, and in relation to sexual abuse. Moreno countered by saying that the testimony of Zimmermann was unbelievable. The Pro-Sai campaigner invented a series of verbal diversions.
Avoiding the crux,  Moreno resorted to a puerile argument that Kevin Shepherd, a “strong Anti-New Age advocate” was citing the testimony of “a New Age follower against [Sathya] Sai Baba.” I was supposed to be “giving credence to New Age beliefs.” Moreno diverted attention from the basic issue by stating that Zimmermann was “a New Age follower of Ramtha.” This theme was further twisted into the erroneous statement that I was “willing to give credence to New Age beliefs by claiming that New Age followers are intelligent, honest, credible and reliable.”
What I actually wrote on this subject earlier that same year contradicts the Moreno tangent:

It is obvious that Zimmermann and other Western devotees were afflicted by concepts and syndromes deriving from the ‘miracle’ projection which Sathya Sai encouraged at their expense. Some of them could not think clearly in emerging from their predicament. Zimmermann expressed misapprehensions about such matters as ‘genital switch miracles,’ and became further distracted by Ramtha channelling…. The due evaluation (by Priddy) is completely ignored by Moreno, who indulges in the injurious subversion of context for which he is notorious amongst ex-devotees…. Diverse analysts have concluded that it is useless to compose responses to such a sectarian agent of misrepresentation.

Despite confusions in the reports of Zimmermann, that source does testify to sexual abuse and the common acceptance of this disparity at the Puttaparthi ashram of the guru. Zimmermann narrates a personal experience of oral sex with the guru, and says that the homosexual activities of Sathya Sai were well known to many ashram residents. Such details serve to confirm other accounts such as those of ex-devotee Conny Larsson.

In contrast, Moreno (alias Equalizer)  chose the superficial and duplicit strategy of emphasising his “New Age” lore. He presented this distraction in a manner which supposedly passed the final judgment, and much to my detriment. “This information is going to be very disillusioning to Kevin Shepherd’s readers and admirers (as few as they are).”
Again the note of contemptuous dismissal. Of course, in such a Pro-Sai argument I only had a few readers, whereas Moreno was obviously claiming a much larger number, meaning devotees of Sathya Sai Baba who believed his distortions and libels. Zimmermann was only one of the many testifiers to abuse, and Moreno could not stop the passage of information.
Another defector from Sathya Sai Baba was the American therapist Elena A. Hartgering,  whose account includes the following:

Dr. [Michael] Goldstein and other officials in the [Sathya Sai] organisation are suppressing information, and attacking former devotees who have testified against Sai Baba. There is, for example, a letter from a woman in California which was sent to all [regional] Center presidents. In our center it was suppressed by the president and devotions coordinator because they were told to do so by the regional president…. Sai devotees resent the organisation being labelled a cult, yet these are clearly cult practices [of suppression] and mind control techniques.

A favoured argument of Moreno was that Sathya Sai Baba had never been convicted of any crime, and therefore allegations of abuse were irrelevant. This theme is evasive and misleading, in view of contextual data concerning the compromised Indian police, and the influence of prestigious devotees in Indian law courts. For instance, a report from the Indian rationalist Basava Premanand informs that a youth was murdered in 1987 after fleeing from being sexually abused by the guru of Puttaparthi. This victim was “murdered by burning in the [Sathya Sai Baba] College campus in daylight.” The contested police verdict was suicide. Other students at the College protested to the police, with the consequence that their parents were given a warning of  police action.
One of the many sexual abuse instances is graphically described in the statement of a fifteen year old victim (an American). Sordid details in such accounts have been known to shock sensitive readers.
Kevin R. D. Shepherd
ENTRY no. 15
Copyright © 2013 Kevin R. D. Shepherd. All Rights Reserved