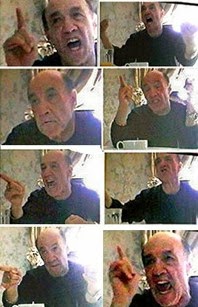 Dr. Michael Goldstein in The Secret Swami documentary
In 2007, the sectarian blogger Gerald Joe Moreno (Equalizer) made the accusation that “he [Kevin R. D. Shepherd] is a thoroughly biased conspiracy theorist incapable of formulating a sober argument, let alone conducting any semblance of adequate or impartial research.” This charming PR exercise was accompanied by another doubtful compliment, via an assertion that the material in my books (unread by him) “is controversial, convoluted and conspiratorial.”
As if to prove his vehement point, Moreno placed three images of myself directly above these statements, an action which struck many readers as an excessive gesture. The observer may deduce that three photographs mean guilty of conspiracy, whereas only one image might have permitted a loophole for a more rational argument than was afforded at saisathyasai.com (which gained the repute of an “inquisition” site).
Cultist campaigners often use words like conspiracy. They frequently see themselves as following an all-encompassing cause, which can brook no objections or resistance. The objector is therefore a conspirator or a biased critic who must be maligned.
Ex-devotees complained that Moreno never revised his extreme statements and numerous errors. He viewed his sweeping judgments as being authoritative, endorsed by his role as defender of the guru Sathya Sai Baba (d.2011).
Some of the ex-devotee victims believed that Moreno was financed in his web campaign by the wealthy Dr. Michael Goldstein, the key American devotee and international leader of the Sathya Sai Organisation. Moreno obviously spent a great deal of time at his vengeful keyboard; his output was prolific.
Goldstein was not popular on ex-devotee sites. “He let down every abused young person by an assiduous cover-up of all questions of sex abuse by US [American] and other devotees or their families, and ceased to reply to letters to him as head of the [Sathya Sai] Organisation.” Quote from Dr. Michael Goldstein, International Chairman of the SSO (formerly online at saibaba-x.org.uk/11/michael_goldstein).
This leading and influential devotee was one of the entities appearing in the BBC documentary Secret Swami (2004). However, Goldstein was very evasive on the subject of testimonies to sexual abuse, with the consequence that a hidden camera technique was the BBC resort.
In this manner, Goldstein was filmed at his home in California, where he was questioned about the sexual abuse. His heated response was considered intimidating by some viewers. Goldstein dismissed the testimonies, claiming that as a physician, he could judge by appearance as to whether anyone had been abused. Goldstein, a devotee since the 1970s, was described as a ranter in this confrontation with the BBC reporter Tanya Datta. Commentators remark upon the fact that, thinking he was in private, Goldstein was very offensive in his aggressive response to Datta. A model devotee was supposed to “speak sweetly,” which Goldstein failed to do in this instance.
This prominent follower was very effectively covering up serious instances of deviation, whether or not he intended this resort as a conspiracy. One sordid drawback was relayed in a report by a psychologist of events concerning an American youth (named as Sam Young), who appeared in the Danish documentary Seduced by Sathya Sai Baba (2002):

Every time we would go back to the personal [interview] room, he [Sathya Sai Baba] wants to be very intimate. He was constantly having me take out my penis and he would hold it, sometimes put it in his mouth and look at me, and then ask me to do the same thing or push my head down and lift his robe up. And I was gagging and almost about to vomit. (Asa Samsioe, How Sathya Sai Baba devotees, like Dr. Michael Goldstein, are weaving protective cocoons of self-deceit around themselves (2009), exbaba.com, Search tab Michael Goldstein)